Life is so unfair. Once again I missed The Bionic Woman. I am sure it was another perfect episode that would have shaped my life in a meaningful way. Guess I will just have to try to grow up without knowing how Jaime saved the world this week.

This week, Jaime trades in the seriously broken down Pyramid for some nicer keys to the universe.

My friends all drive Porsches,

(Edited Nov. 1, 2015 to include wardrobe + additional notes and images)

The Pyramid was all simply a bad dream. You know how I know this?

Because Jaime was wearing pajamas the entire time.

I guess I must have had too many vodka martinis and fell asleep on the sofa. Even my mood ring passed out.

Because in this bizarre episode that didn’t make any sense, the US government was launching space rockets to “seed” the atmosphere with chemicals that magically fixed the ozone layer. (I have already rushed a letter to Al Gore about this miracle solution to our global warming crisis—and to think this just came to me in a dream!!)

I could have sworn I saw glowing crystal balls that looked like snow cones. But I can’t even bear to go back to watch this again. I just have to cue Jaime’s migraine flashback face again and try to jot down what I can recall.

Where Neverland Meets Wall Street: There was some guy with a really bad haircut that looked like Bernie Madoff in a toga, who was running a pyramid scheme, and he kept communicating with a flashing, K-mart blue light special out in space. Just like Tinker Bell, this space man sprinkled fairy dust on Jaime that made her instantly fall asleep. (Careful, these pyramid people can read minds, too, and they just heard you think “WTF?”)

The Magical Mystery Tour: There were all kinds of ancient artifacts from Indiana Jones’ Lost Temple of Doom laying around. And hieroglyphics on the cave walls. Just in case there was a pop quiz later, Jaime kept mentally giving us (her substitute students tonight) the audio walking tour of this little makeshift museum.

There was some tall, King Tut tomb soldier character who was quite scantily dressed and never spoke. Jaime lead this tomb soldier to the OSI headquarters to help steal Rudy’s crystal replacement ball and she bionic-cut some plate glass window with her fingernail. (in my dream, she was also scratching out a message of desperation.) This was the first time I have ever seen her cut glass, and sadly, this would turn out to be my favorite part of the dream. There was also a fight scene with the tomb soldier where Jaime did a cool ninja flip when he tried to hit her with his canoe paddle.

Don’t You Have A Mission in Budapest You Can Go To Early? I’m not sure, but I think I woke up screaming once when Jaime icky-kissed a new Not!Steve 3.4, the Let’s-See-If-We-Can-Fool-Our-Upset-Audience-By-Casting-A-Steve-Lookalike guy. His yeah-whatever name was Chris Williams and he worked for the OSI space department or something, and Jaime was picking him up for a date in her brand spanking new Mercedes. (Since this was clearly a dream, I am SO glad we’ll never have to see this guy again. Woah.) 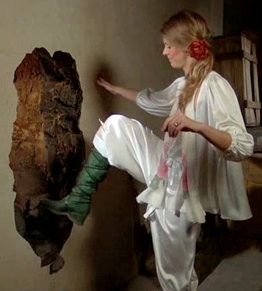 Anyway, in protest, I hurled MY version of fairy dust at the TV screen—a handful of birth control pills just to make sure the writers of this piece of work would never be able to spawn, thereby saving the next television generation. And then I fell back asleep, but unfortunately the LSD trip commenced.

Welcome To Fantasy Island: Whenever it came time for an opportunity to give the audience some kind of logical explanation to, I dunno... make us actually care—like why would this ozone-fixing chemical have the power to blow up an alien spaceship on contact, yet be totally approved by the EPA as safe for the earth’s atmosphere?— they would just ignore it and move on.

Near the end, Jaime had to surrender the little atomic power pack in her bionic arm, but like playing doctor with Barbie dolls, they just pretend-surgery’d it behind the crystal stand for like 2 seconds. She didn’t even say ouch.

Quick, Get Max So He Can Share The Bionic Blame: Then they went and recruited Max for the last scene to go find and rescue Jaime, who happened to be sitting in her new car right next to where Oscar was standing. I think even Max was like “you boneheads woke me up for this?”

Although I do give Max credit for being able to accurately sniff out this bomb right away. Plus, there is nothing more heavenly to both dogs and humans than the smell of a new Mercedes.

Despite it all, at the end of this mashed mishap, Jaime had risked her own life so that she could save all the little children of the world. I just love happy endings, which is why I made sure it was in my dream.

Anyway, I’m pretty sure that before the Bionic Woman even agreed to take on this ridiculous assignment, here was her newly-renegotiated contract with Oscar upon reading the mission script:

​  From the Desk of Ms. Jaime Sommers Dearest Oscar, Just finished reading “The Pyramid.” Are you f-ing crazy? Thanks for pinning that “save the world” thing on me so you knew I would have to step up. I want a new Mercedes Benz 450SL for this. And my pajamas better be made out of silk, not flannel. (Don’t you dare let wardrobe make me look like Aladdin, either.)  Also, please get me a giant red rose garnish for my hair so people will focus on that and not the ridiculous story going on behind me. BTW, “Land of the Lost” called. They want their set back. Oscar, darlin’, as you know whenever I get angry, I am just too nice of a person to commit violence or tell people what I really think.  So as I borrow a bit from this cop-out plot, I hope you’ll read my f-ing mind right now and my thoughts regarding any attempt to bring me future whacked-out missions like this again. Ever. I hope I may continue to look forward to meaningful, well thought out stories that are even remotely plausible throughout the remainder of the season. Did I mention I wanted my shiny, new 450SL in factory ‘Snow White?’ Affectionately Yours,Jaime PS : And see how short you can order those shorts on that good-looking thong...I mean tomb soldier. Also, when you ask me at the end for an explanation of “what happened,” I’m just going to give you a look of silence. This will be a Jaime Sommers death stare like you have never seen before. Heed to this, my friend. This will be code for shut up unless the OSI is prepared to buy me an expensive penthouse in DC, too.

I would label this as one of the most unusual outfits the Bionic Woman wore in her series, and I wasn't kidding about reminding me of Aladdin-style pajamas. A 2-piece white silk ensemble consisting of a strapless top with parachute pants and matching jacket. Paired with green, front lace knee-hi nylon boots, a scarf with rose detail and of course the rose barrette in her hair. This looked really comfortable to sleep work in.

Someone once told me Ms. Wagner had a wardrobe malfunction story linked to this outfit while filming a jump off the balcony. For any one who as ever worn a strapless dress or top, I think we can all relate... 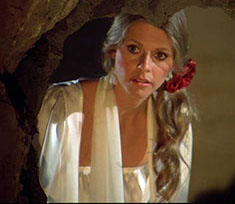 HANG OUT WITH US

The Bionic Woman and the character of Jaime Sommers are © Universal Studios. This website is produced by a fan just for fun, and is in no way affiliated with, nor endorsed by, Universal Studios or the cast or crew of this series. No copyright infringement is intended.